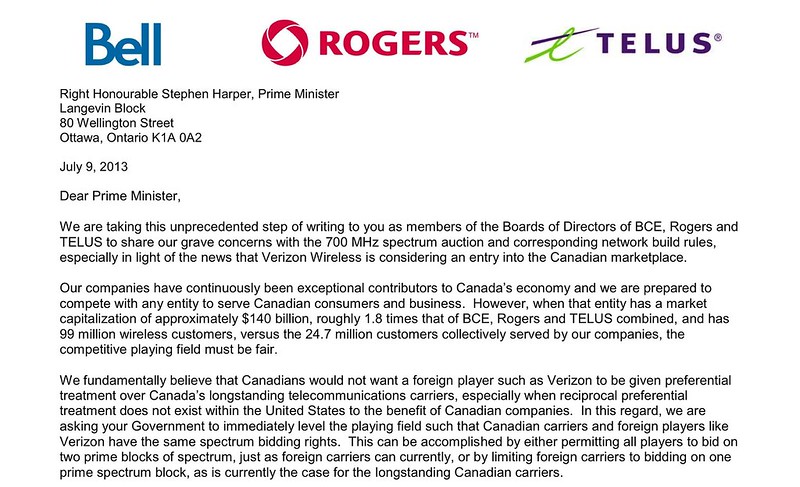 Will this help or hurt your Ottawa business?

Following the news of U.S wireless company Verizon’s initial $700 million offer for Canadian wireless company Wind Mobile, and their plans to purchase Mobilicity, the three dominant mobile companies in Canada have launched a full court press against the new competitor.

Canada’s new industry Minister, James Moore, and Prime Minister Stephen Harper will surely be hearing a lot of complaints from Rogers, Bell and TELUS in the next few months. The three companies arranged for 35 members of their boards to advocate to Moore and Harper directly about the issue.

In addition, they’re also launching a publicity campaign with a series of media interviews and ads by the three companies’ senior executives, to prepare for the next wireless spectrum auction in January 2014.

Verizon is considering participation in the spectrum auction and could purchase Wind and Mobilicity. There are rules in place designed to promote competition, which prevents the three Canadian mobile companies from buying Wind or Mobilicity.

“Your government has clearly indicated its desire for increased competition in the telecommunications sector,” wrote CCCE head John Manley, who serves on the TELUS board. “While we as a council support that objective, we also believe that public policy should not discriminate against Canadian companies in favor of large foreign operators.”

The Canadian Council of Chief Executives  (CCCE) also sent a letter to the Prime Minister explaining that the three dominant mobile companies believe that the wireless competition policy is in favor of large foreign entities like Verizon, and holds them above the domestic incumbents.

BCE Inc. – which owns Bell Canada – has also placed two-page ads in various major newspapers explaining that if the Canadian feds let Verizon enter the Canadian marketing they will be giving “special regulatory advantages” to Verizon communications.  Bell goes on to explain that the government “inadvertently left holes” in the policy and strategy, and will put Canadian-owned carriers at a huge disadvantage when facing Verizon.

Do you have questions about mobility in your Ottawa business?  Call Fuelled Networks and speak with our Ottawa mobility experts.  Call us today at (613) 828-1280.